In 2019 Victims First has launched a campaign to raise awareness of coercive control and emotional abuse in relationships.

The latest phase of the campaign is the launch of a video 'Don’t Disappear’.  'Don't Disappear' highlights the red flags to look out for in a relationship which can be the warning signs of controlling behaviour and abuse.  It follows the story of Jamie and Emma, from the seemingly loving early stages of their relationship, to the development of abusive behaviour.

Click on the image below to view the video

Coercive control became a criminal offence in 2015 and involves an act or a pattern of acts of assault, threats, humiliation and intimidation or other abuse by a perpetrator that is used to harm, punish or frighten their victim.

Although anyone can be a victim of coercive control, ‘Don’t Disappear’ is particularly aimed at younger people who may have less experience of relationships or people who are at the beginning of a relationship, to raise awareness of the red flags which at the time, may be missed or misinterpreted as acceptable behaviour.

The video covers a range of controlling behaviours exhibited from Jamie to Emma including:

Although in this example Emma is the victim, both men and women can be victims or perpetrators of coercive control which can take place in heterosexual and same sex relationships.

Other examples of coercive control include, depriving someone of basic needs, monitoring their time and activities, taking control over aspects of their everyday life such as where they can go or who they can see, humiliating, degrading or dehumanising someone, controlling their finances and making threats or intimidating behaviour.

Don’t Disappear followed Victims First ‘Know this isn’t Love’ campaign about coercive control.  The campaign focused on various aspects of emotional abuse and controlling behaviour and includes nine examples of different behaviours people may experience in this type of abusive relationship, for example, isolation, manipulation, threats and control. These are told through both male and female examples and also include examples from same sex relationships.

You can download the campaign materials using the links below. 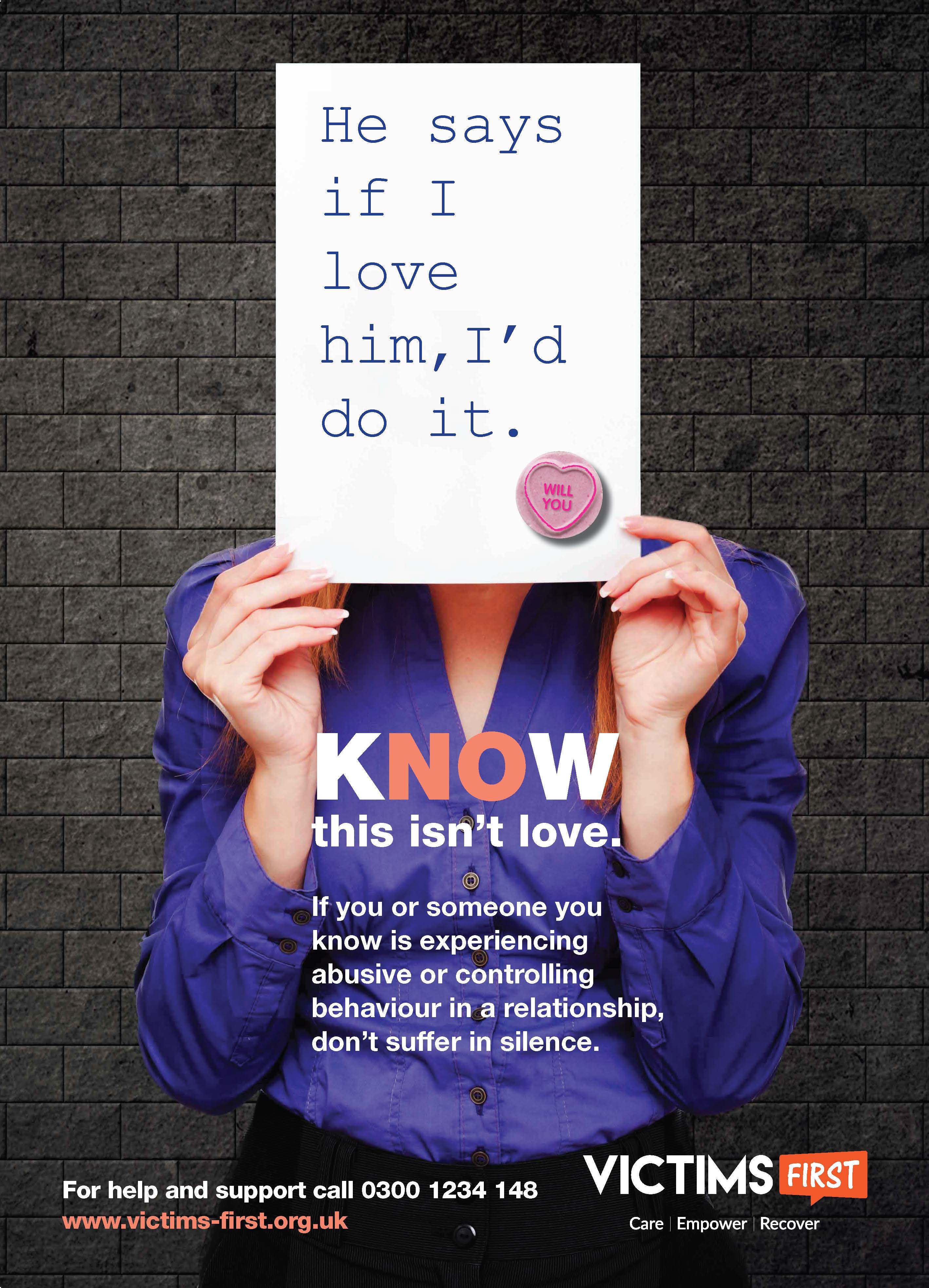 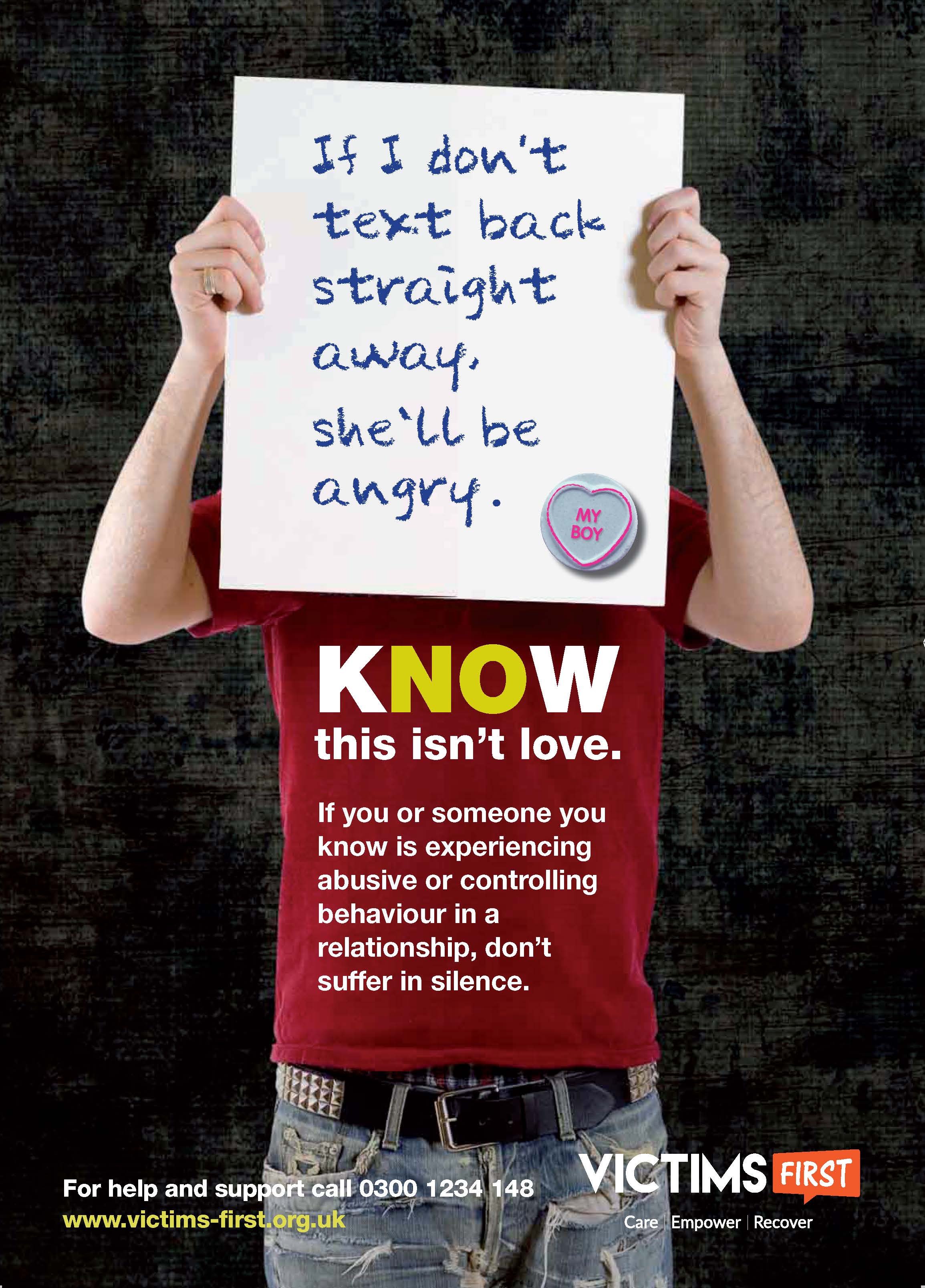 Survey
Victims First recently surveyed victims of coercive control across Berkshire, Buckinghamshire and Oxfordshire and had 670 people respond who described 811 relationships. Some key findings included:
• A third of people who responded to our survey have been in more than one abusive relationship
• Half of the abusive relationships began when the victim was under the age of 25
• 45% of people who responded to our survey were in the abusive relationship for more than 10 years
The most common types of behaviour that victims faced was verbal abuse, isolation from friends and family and emotional abuse, including gaslighting (manipulating someone into doubting their sanity).
• 79% had experience verbal abuse, shouting and name calling
• 74% had experienced gaslighting or emotional abuse
• 71% had been isolated from their friends or family
• 62% had been victims of extreme jealousy or obsessive behaviour
• 53% had been manipulated into doing things they were uncomfortable with
• 51% had experienced their finances being controlled
• 48% had been threatened with violence to keep them controlled

Louise first met her boyfriend when she was a teenager and the controlling behaviour began a few months into the relationship. At first she was flattered by the intensity of it and thought that as he wanted to spend so much time with her he must really care but as time went on his controlling and abusive behaviour worsened. He would verbally and emotionally abuse her by calling her names and making degrading comments about her appearance. Although he was sometimes violent the emotional abuse and controlling and manipulative behaviour were far more frequent and took an impact on her confidence and self-belief. He would tell her what she could wear and who she could spend time with, slowy cutting her off from friends by manipulation and making untruthful claims about them. The relationship lasted one year, and off and on for a further year or so.
A while later at the age of 17 she began another relationship with a new boyfriend. Although the relationship was good at the beginning and he couldn’t have seemed more different to her first boyfriend he too began to show abusive behaviour after a few months. He verbally abused her into having sex and would control what she did, who she saw and what she wore. He used intimidation, violence and threats of violence to make her do what he wanted. They went on to live with each other and the abusive behaviour continued. When she ended the relationship four years in he began stalking her to convince her to resume the relationship, even making threats to kill himself and her if she didn’t take him back. At the time of the relationship she didn’t realise his behaviour was abusive and thought he just had anger problems. It was years later, and really confirmed after doing training to facilitate a domestic abuse survivors programme called the Freedom Project as part of her job, that she was able to truly identify the patterns of coercive behaviour in both the relationships and realise that it was abuse. She has since received further support through personal therapy and is now in a healthy and happy relationship. Her experience has driven her to help others and she has facilitated domestic abuse programmes to help raise awareness of abusive and unhealthy relationships.

The abuse in Isabella’s relationship started straight away with both controlling behaviour and aggressive sexual contact. He would use manipulation to force her to do what he wanted often sulking or refusing to speak to her if he didn’t get his own way, forcing her to take the blame and apologise. As the months went on the abuse worsened. Her boyfriend would no longer allow her to see her friends and when she was away from him he would monitor her activities and keep track of where she was. He would accuse her of cheating and go through her social media accounts to delete any male friends, eventually closing down her accounts completely. Her phone was also checked regularly and he would confiscate it to ensure that she couldn’t call anyone.
Over time the psychological torture increased and he would convince her she was going crazy by doing things like hiding her possessions. He would call her names and make degrading comments about her intelligence and claim that no one could love her. As he often refused to let her sleep, her mental capacity was drained through sleep deprivation. She was living in a state of fear and uncertainty, never sure when the next incident would happen or what mood he would be in.
He took control of her finances, forcing her to do things, including sexual acts, to earn money for necessities such as sanitary products or food. Violence or the threat of violence were also used as a tool for control, in particular to force her into sexual acts, and he would make her stand against the wall or kneel on the floor for hours if she refused to do as he said. Even when the relationship ended after a number of years he still tried to maintain the abusive behaviour and control.
You can read more about coercive control here

There are nine A4 posters available to download and print.  The designs focus on both female and male victims and same sex relationships.  You can download the pdfs of the posters below