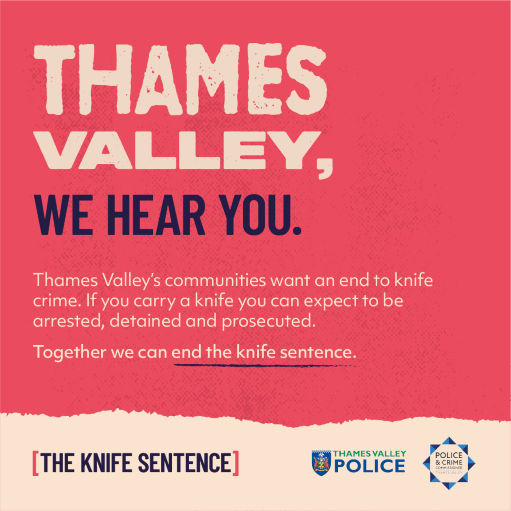 The Office of the Police and Crime Commissioner and Thames Valley Police have launched a tough new approach to tackling knife crime, focussing initially in the city of Milton Keynes.

The initiative, driven by Police & Crime Commissioner (PCC), Matthew Barber, will be known as Operation Deter, and will focus on prosecution, intervention and prevention.

It launched in Milton Keynes on the 1st July, where there is particular community concern about knife crime after a number of tragic incidents earlier this year.

We know that knife crime often leaves victims in its wake and we’d urge anyone who needs help following a criminal incident – whether this has been reported to the police or not – to contact us now.

Although year on year, knife-enabled crime is down across the Thames Valley Police area, Operation Deter’s main objective is to make better use of charging and remanding offenders aged over 18 to court, ensuring that a robust message is sent to anyone found in possession of a knife.

It also looks to support young people out of a knife carrying culture to lessen the impact on victims and themselves.

You can read more on the Office of the PCC website.

If you've experienced violent crime and need support, we can help.  Visit Get Support Now for ways you can contact us.